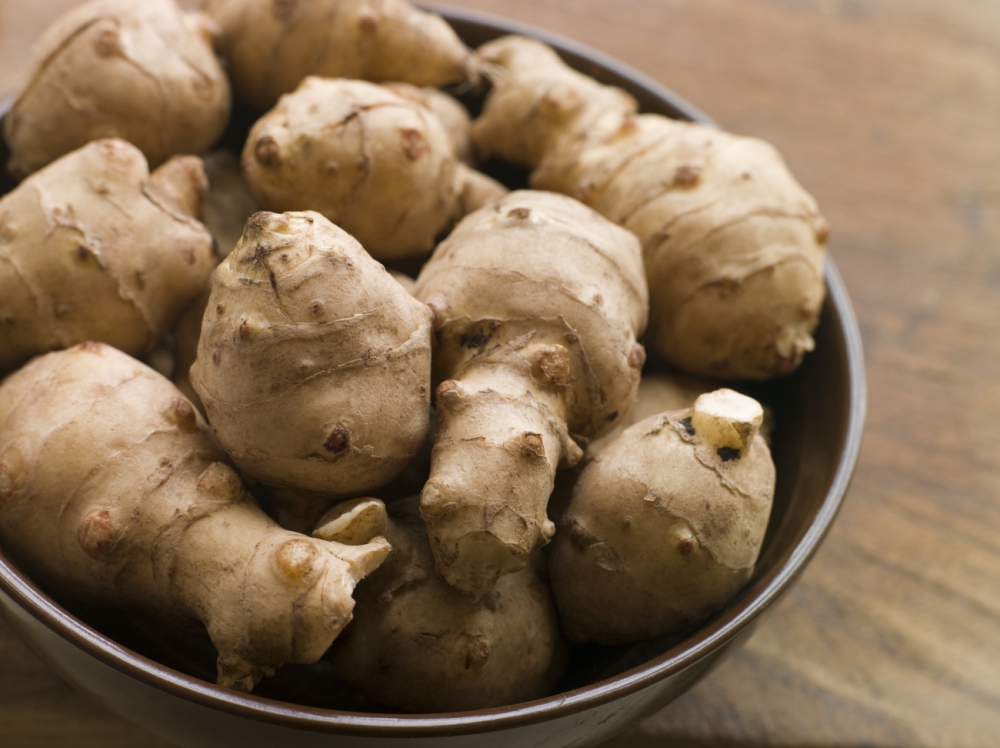 Sunchokes, of the sunflower family, are native to North America where the natives called them “sun roots” before European settlers arrived. Samuel Champlain, a French explorer found them in Cape Cod in 1605 and pronounced them similar in taste to artichokes. But why “Jerusalem artichokes”? They don’t come from Jerusalem nor do they look like artichokes. There are a few theories: when first discovered people started calling them “girasole” (or flower that turns looking for the sun) which eventually became “Jerusalem”. Another possibility is that as sunchokes became the staple food of the first European pilgrims in North American soil they named it as food for the “new Jerusalem”.

Sunchokes can grow up to 10ft, and if left to their own devises will live forever in the same spot, but quality of tubers will deteriorate if not frequently divided and replanted in fertile soil. They grow best in the sunniest spot, just like their cousins the sunflowers, with an optimum temperature of 65-80°F and 125 frost-free days. But the tubers will be at their prime when harvested after the first or second frost.

And speaking of the tubers, these look like small, knobbly potatoes but crunchier, sweeter and do have a slight taste of artichoke. They practically contain no starch, but plenty of inulin (not insulin), which becomes fructose when spuds are stored in the ground or refrigerated. The humble sunchoke is considered gourmet fare by many. Raw, it’s an excellent substitute for water chestnuts in hot and spicy stir fries, or cooked in cream soups, broiled with sweet potatoes, or simply scrubbed and baked.