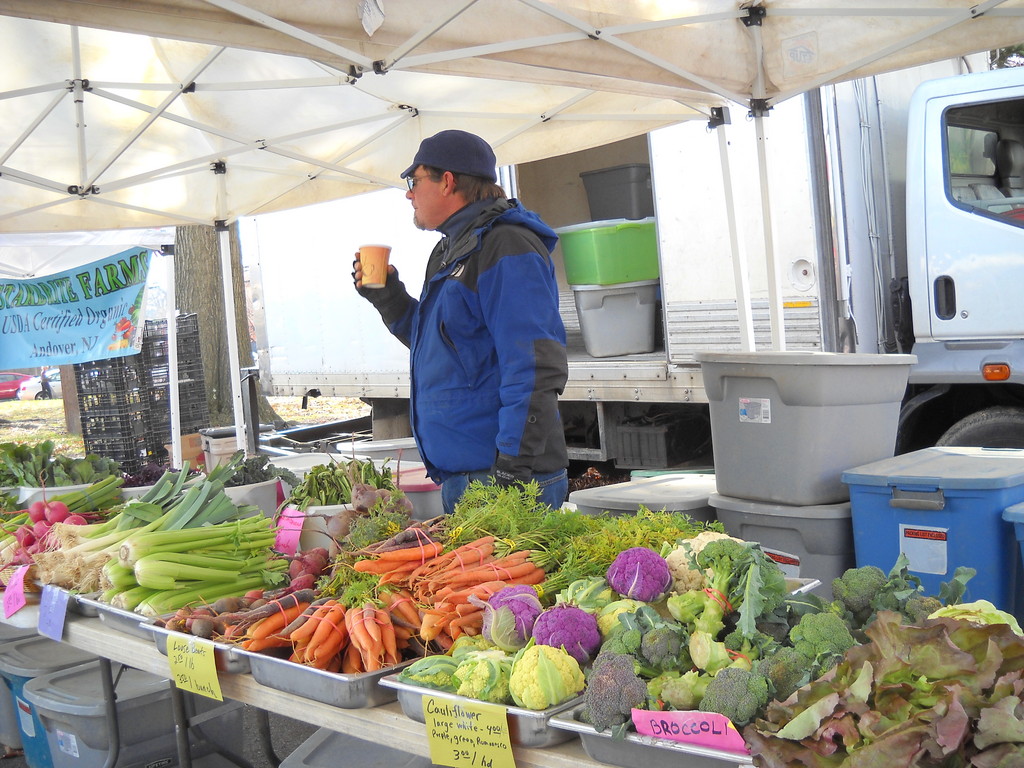 My name is John Krueger and I am the owner/operator of Circle Brook Farm (formerly Starbrite Farm). I have been interested in organic gardening for over 25 years, as an avid gardener, and as co-founder and an officer of the Cook Organic Gardening Club. I earned a B.S. in Environmental Science from Cook College, Rutgers University in 1989.

In 1996 I was hired as Farm Manager of Heirloom Harvest Farm in Blairstown NJ. During my six years at Heirloom Harvest I was able to draw on my experience as an organic gardener and to gain experience in the techniques and equipment for larger scale vegetable production. I was given the opportunity to attend numerous conferences and workshops related to organic farming.

In 2002 the owner of the farm decided to discontinue operations in NJ. I was determined to continue my involvement with organic farming and that year I began working with Richard Moran at Starbrite Farm in Hardwick Twp. NJ. Dick had been farming organically on his property for 10 years since retiring. In 2003 Dick allowed me to take over operation of the farm and I began working with the Bloomfield-Montclair CSA and selling at the Montclair and Morristown farmers markets.

For the 2006 season I was chosen to be the farmer for the Downtown Harvest CSA in Jersey City. During the 2007 season a new CSA group in Westfield was added and Starbrite Farm supplied produce for 200 members.

In 2007 I began leasing an additional 7 acres from Good Hand Farm in Andover Twp. In 2008 I began leasing a part of Circle Brook Farm which is adjacent to my fields at Good Hand Farm. The property includes a large house where I now live and house workers, and a large barn.  The barn is the center of our operations; it houses 2 walk-in coolers and serves as packing house, mechanic shop and lunch room, among other functions. The entire Circle Brook Farm encompasses 80 acres and includes a second small house and barn. It has been my hope and dream since 2008 to one day purchase the property.

In 2010 the farm served approximately 400 members through 7 pick-up sites. In 2011 planting in Hardwick Twp., at the original Starbrite Farm property was suspended. For the 2012 season I began renting a 10 acre parcel in Allamuchy, about 5 miles from Andover. The property features deer fence and a well/water system. In 2012 we served 650 members and sold at 3 farmer’s markets- Montclair, Teaneck, and Denville. There are currently distribution sites in Montclair (3 locations), Westfield, Jersey City, Morristown, Newark, Metuchen, Staten Island, Caldwell, and Millburn. For the 2013 season I added one new group in New Brunswick and increased membership to about 700 members.

In November of 2013, thanks to the generous support of many CSA members I was able to turn a long time dream of owning my own farm into a reality. I have purchased the 80 acre property known as Circle Brook Farm. This has been my home for the last 6 years and now will be for the rest of my days. I now have an additional 50 acres of land that will be transitioned into organic production.  I am anxious to begin planting fruit trees and bushes, and slowly begin expanding into production of eggs, and other grass fed animal products. I have a grand vision of a diversified and integrated farm, something akin to the typical small farm of 100 years ago, except with the cutting edge techniques and materials available in the 21st century. It will be a sustainable operation producing nutritious food for as many folks as possible with a minimum of external inputs; one of many emerging “model farms” that are leading the way as we learn to farm for the future. But more than this it will be your farm. A place for CSA members and market customers to visit; a place to bring your children to teach them the source of their food.