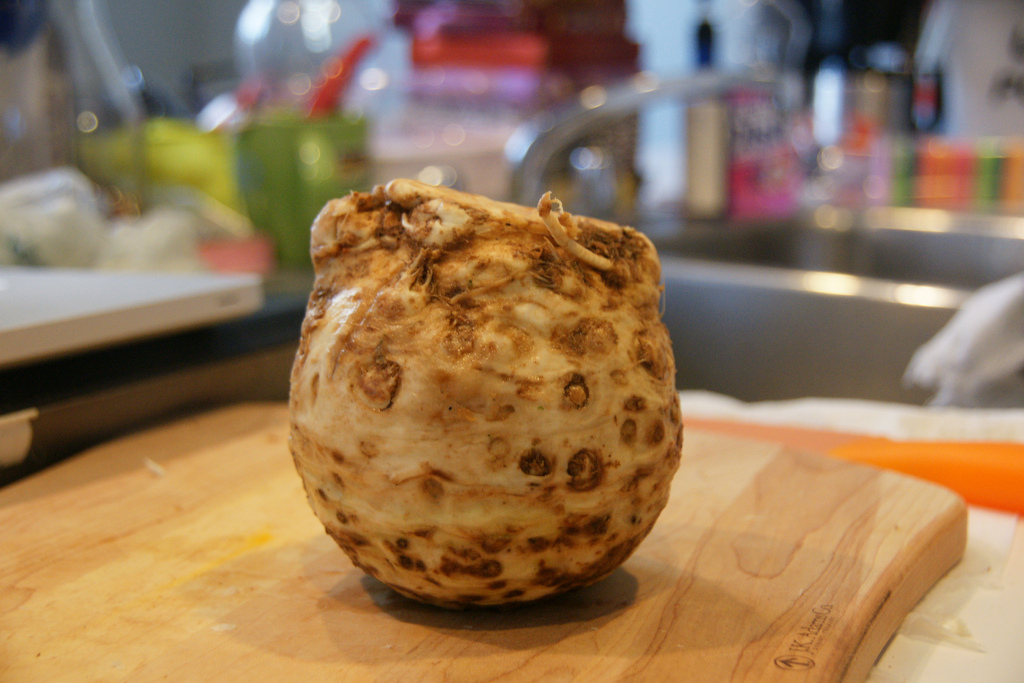 Celeriac, aka celery root or knob of celery, is a distinct variety from the plant that produces the green stalks we enjoy in salads and soups; is cultivated specifically for its large, robust, and unfortunately rather ugly root.  It is a distant cousin to anise, carrots, parsley and parsnips.  Celeriac is recognized for its large, round, knobby and deeply gnarled, root ball.

It has a dense ivory flesh like that of a turnip, with a pronounced nutty, earthy flavor that reminds one of celery and parsley.  Very popular in Europe, it is traditionally baked into smooth, sweet gratins and purees.  It can be substituted for up to half of the potatoes for a twist on mashed potatoes, incorporated into soups and stews, or grated raw into salads.

The history of celeriac is quite long.  Celery has been cultivated as an edible plant for thousands of years, and Mediterranean gardens began to breed a form of celeriac hundreds of years ago.  In the Middle Ages, celeriac spread upwards from the Mediterranean, finding its way into Northern European cuisine.

The growing period for celeriac is long, and the roots can take up to 200 days to fully mature.  When mature, the portion of the plant which grows above the ground looks much like common celery, with an assortment of stalks arranged around a central point on the root.  When the celeriac is harvested, the knobby root with trailing threads of roots is revealed.

When ready to use, scrub the root ball with a stiff brush under cold running water.  Trim the root end.  With a sharp paring knife or vegetable peeler, peel away the thick skin as needed to remove any browned spots or ridges;  you may lose at least ¼ or more of the celeriac during peeling.  A 1 pound celeriac will yield about 2 cups once peeled and sliced or grated.  Immediately sprinkle the root with lemon juice to prevent discoloration, then follow your recipe as directed.

Celeriac can be stored in a plastic bag in the fridge for up to 5 days.