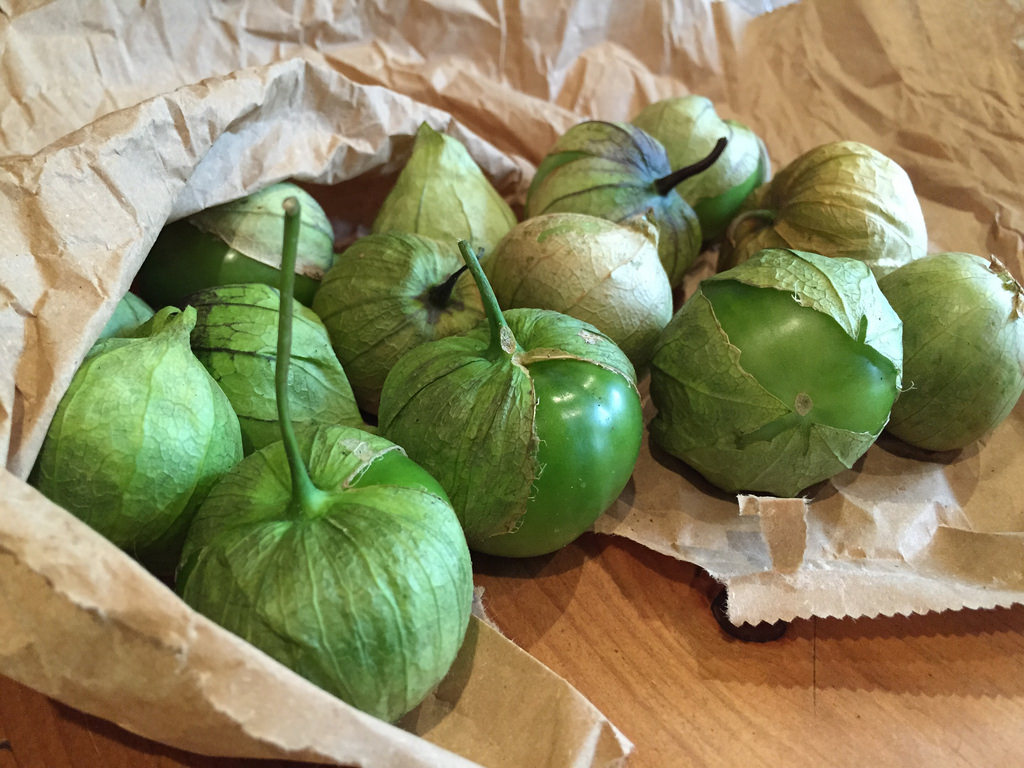 Tomatillos are also called “tomate verde” in Mexico (which means green tomato) and are considered a staple in Mexican cooking.  They are a member of the nightshade family, related to tomatoes.  Tomatillos now grow everywhere in the Western Hemisphere and are common in Texas gardens.

Tomatillos can range in size from about an inch in diameter to the size of apricots.  They are covered by a papery husk which may range from the pale green or purple color of the fruit itself to a light grocery-bag brown.  Before using tomatillos, remove the outer inedible husks, and rinse well, as the fruit is covered in a sticky wax.  They are very easy to cook because they don’t need to be peeled or seeded.  Their texture is firm when raw, but soften when cooked.

Raw – Raw or uncooked tomatillos are often in Mexican sauces. They add a fresh citrus-like flavor.

Blanching – Blanching mellows the flavor. Bring a large pot of water to a boil. Add the whole tomatillos (husks removed and rinsed) and boil for approximately 5 minutes or until soft. Drain and crush or puree as directed in your recipe.

Fire Roasting – Roast under the broiler, with a propane torch, or over an open flame such as a grill. Make sure the heat is quite hot before roasting. If the heat is not hot enough, the tomatillos will turn mushy before being charred. The charred or slightly blackened skins will enrich your sauces with a smoky flavor.

Dry Roasting – This will produce an earthy, nutty flavor. Place the tomatillos in a heavy fry pan (preferably a cast iron pan). Turn heat to low and roast for approximately 20 to 30 minutes, turning occasionally.

If you are not going to use them immediately, leave the husks intact, wrapped around the fruit like little paper bags. Either store on the counter or in the refrigerator. They should never be stored in air-tight containers. They will keep well for several weeks to a month. They may also be frozen whole or sliced.